Roy Keane briefly allowed himself a moment to crack a joke with his fellow Sky Sports pundits, before interim Manchester United boss Michael Carrick brought him back to earth.

END_OF_DOCUMENT_TOKEN_TO_BE_REPLACED

The former United and Ireland captain was on duty at Stamford Bridge as his former side drew 1-1 with Chelsea. He paid credit to the United players for working hard to give Chelsea a decent contest, but noted that Thomas Tuchel's side had more quality.

Following the game, Keane and fellow pundit Jimmy Floyd Hasselbaink were asked by host Dave Jones who they fancied for the Premier League titles. We are now over a third of the way through the season, and Chelsea are ahead of Liverpool and Manchester City, with the chasing pack flagging already. 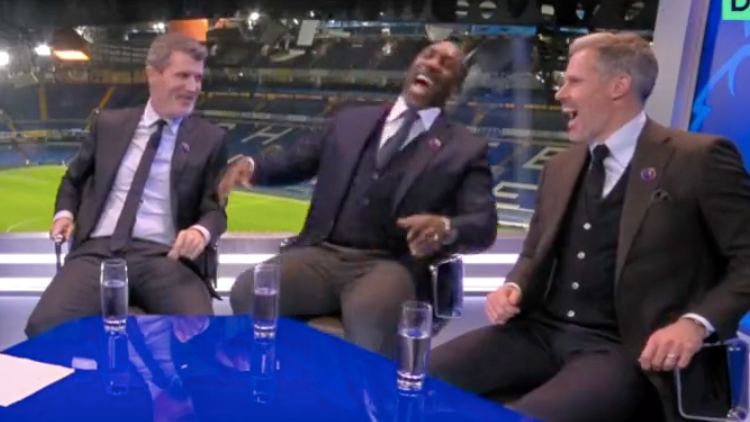 Jones asked Hasselbaink for his tip for league winners, and the former Chelsea striker was initially hedging his bets.

Hasselbaink did concede that he would love if Chelsea finished top of the league, and added that it was 'going to be tight'.

It was then Keane's turn to stick his neck out.

Jones asked KeaneL "What about you, Roy?"

To which Keane responded: "I think it's going to be tight!"

Roy Keane did eventually go for Manchester City as his tip, and said they are a team capable of winning 15 or 16 straight games.

END_OF_DOCUMENT_TOKEN_TO_BE_REPLACED

When the laughter died down, Michael Carrick came on for his post-match interview and the smile dropped from Keane's face. The Cork native was fuming with Carrick lavishing players that he felt had let down former manager Ole Gunnar Solskjaer.

Then Jamie Carragher had the temerity to suggest Cristiano Ronaldo should start more games on the bench...

Roy Keane and @Carra23 get very heated about why Cristiano Ronaldo signed for Manchester United 🤬 🍿 pic.twitter.com/GEPGBDNI5u

The man is pure box-office.