"I'm still telling him now not to shoot."

At the age of 36, Cristiano Ronaldo is still banging in the goals at an unprecedented rate. So far this season, he has 23 goals in 26 games across all competitions. You will not be surprised by these statistics, but it is worth taking a moment to process just how impressive it is for a footballer to sustain such consistency in front of goal for such a long time.

END_OF_DOCUMENT_TOKEN_TO_BE_REPLACED

Ahead of Juventus' Champions League knock-out tie with Porto on Wednesday night, the BT Sport panel discussed the magnitude of his longevity, with Joe Cole saying the world of football had "never seen a player like him"

Rio Ferdinand then went into more detail as he recalled one of Ronaldo's best ever goals, of which there are many, scored away at Porto 12 years ago (I know, feel old yet etc.)

"I'm still telling him now, 'no!', not to shoot," Ferdinand said remembering the 40-yard strike at the Estadio do Dragao.

"He did things in games that would make you scratch your hair, you'd say, 'How?'," he added.

"He silenced a lot of people."

As Cristiano Ronaldo returns to the scenes of one of his greatest ever career goals, @rioferdy5 shares his version of events from a famous evening at Estádio do Dragão 💫 pic.twitter.com/M2z28bEy50

END_OF_DOCUMENT_TOKEN_TO_BE_REPLACED

"When the ball comes into him here, he gets his head down. At that moment, I'll never forget it, I tell my kids about this all the time.

"I was screaming here, 'No! No! No!" Rio explained, as he tried to convince Ronaldo to pass the ball instead.

"He doesn't even look up and look for anybody, he just gets the ball and straight away, all he's thinking about doing is shooting.

"I'm behind him there," Ferdinand demonstrated.

"My face and his face are identical there," he said, before Gary Lineker quipped back: "They're probably the only similarities between you too." 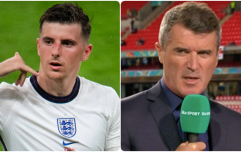 END_OF_DOCUMENT_TOKEN_TO_BE_REPLACED

Talking about the celebrations after the ball had rocketed in from 40 yards out, Rio said: "I'm going mad here. Things like this, I used to love this. 'This is why you're the best'," he said, explaining what he said to Ronaldo in the aftermath of his wonder goal.

In response to Lineker asking Ferdinand why he was strangling Ronaldo in the image above, Ferdinand admitted: "Because I wanted him to stay."

"I was begging him, like all the other players at the time, 'please stay'. This was the third league title on the bounce, we wanted to break the records and stuff.

Ronaldo didn't stay after that season, but the six years he did spend with Manchester United were when United played some of the best football the Premier League has ever seen.

This was something of a coming of age moment for Ronaldo, Rio explains, having "tried to play the occasion" away at Benfica a couple of years before.

"The manager caned him at half-time," he said. "Almost crying he was."

"He got here, maturity was top notch, scored that goal and silenced a lot of people."

popular
Sex expert says these are the four words you should always say in bed
UK Government urges children to sing bizarre 'One Britain One Nation' song on June 25
Hospital 'declares black alert' after A&E flooded with hundreds of patients
Young elephant dies in Somerset zoo attack
Daniel and Lily from The Undateables have called off their wedding
UK government roasted for getting kids to sing creepy ‘One Britain One Nation’ song
Crystal Palace footballer is one of four British women suing Pornhub
You may also like
News
More than 60,000 fans allowed in Wembley for Euro 2020 semi-finals and final
Sport
Make no mistake, UEFA's pathetic Allianz decision sides with the oppressor
Sport
Jack Grealish in line to start for England vs Czech Republic
Sport
England confirm Mount and Chilwell must complete 10-day isolation
Sport
Denmark boss reveals subtle tribute to Christian Eriksen after emotional Russia win
Next Page