Glass on pitch delays second half of Old Firm

Hart appeared to have a glass bottle thrown in his direction

The start to the second half of the Old Firm derby between Rangers and Celtic was delayed on Sunday after a glass bottle was thrown in the direction of Joe Hart, breaking on the Ibrox pitch. 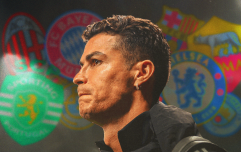 END_OF_DOCUMENT_TOKEN_TO_BE_REPLACED

Celtic were leading 2-1 at the time after they came from behind to take a first-half lead.

Aaron Ramsey gave the hosts an early lead before Tom Rogic quickly responded with an equaliser.

Cameron Carter-Vickers then put Ange Postecoglou's side ahead on the stroke of half-time in the game which could have a huge say on who wins the Scottish Premiership.

However the start to the second half was marred by the bottle incident.

Hart was seen alerting referee Willie Collum that there was a broken glass bottle on the playing surface.

The second half restart was delayed by five minutes

Footage showed the bottle to be smashed into several shards of glass and as a result, the restart was delayed by five minutes as Rangers' groundsmen removed all pieces to ensure the safety of the players.

Other objects also appeared to be thrown from the crowd behind Hart's goal in the early minutes of the second half.

The start to the second-half at Ibrox was delayed due to a glass bottle being thrown onto the pitch 👇 pic.twitter.com/cffhNf6p1u

Rangers supporters also delayed their side's match with Dundee last month by throwing tennis balls and toilet roll on to the playing surface at Dens Park.

The protest took place during the opening minutes of the Premiership encounter, with fans continuing their protests against the club's decision to play against Celtic in the Sydney Super Cup.

Both clubs had agreed to play in the November tournament, which is due to take place at the same time as the Qatar World Cup.

Rangers have since confirmed that have withdrawn from the tournament.