The German manager took over at the Parc des Princes at the start of the summer, replacing the now Arsenal manager Unai Emery at the helm of the nouveau riche side.

It appears that he has been very quick to let the players know who's boss (presumably the big sign on his office door saying 'Le Coach' isn't enough) by setting some very strict rules.

Among them, according to France Football, is a ban on carbonated drinks, sweets and a strict set of diets for certain players including Dani Alves.

His most unusual rule though appears to be that surrounding nightclubs. PSG's players like a night out, it's a natural development of having Neymar in the first team. Tuchel however doesn't like nights out. He likes nights in with a nice warm cup of tactics.


As such, he's contacted a number of Parisian nightclub owners and asked them to contact him whenever they see his players turn up for a little bit of a dance. 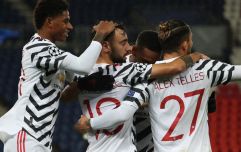 END_OF_DOCUMENT_TOKEN_TO_BE_REPLACED

Tuchel's tendencies towards demanding control may hark back to his days at Borussia Dortmund, where he was head coach before a recent sabbatical, replacing Jurgen Klopp after the club had felt that his style of management had lost its efficacy at the club.

Despite this, Tuchel continued with a similar style and enjoyed initial success, finishing as Bundesliga runners-up in his first season. What followed was a tumultuous spell though as a host of first team players were sold, angering the manager.

Tuchel was quick to make his displeasure public, and found himself at odds with the club's hierarchy. He would eventually lose his job three days later.

Exactly how his PSG respond to these new measures remain to be seen, but knowing Neymar's willingness to accommodate to other people's needs, we assume it'll go off without a hitch.