No quadruple for them

Paris Saint-Germain were sent crashing out of the Couple de la Ligue on Wednesday night as Guingamp overcame a one goal deficit to win with two late penalties.

Neymar gave PSG the lead just after the hour mark, which you'd be forgiven for thinking was enough to kill Guingamp's hope of a victory, and would only be the beginning of a comfortable victory.

But Guingamp refused to roll over, and in the 83rd minute, earned themselves a penalty, which substitute Yeni Ngbakoto buried from 12 yards.

The game was heading for extra time, until the visitors won themselves another penalty in injury time. This time, it was Marcus Thuram - son of France legend Lilian Thuram - to step up. After a short run up, the forward struck the ball calmly to the goalkeeper's right, and crept in despite Alphonse Areola getting a hand to it. 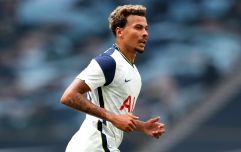 END_OF_DOCUMENT_TOKEN_TO_BE_REPLACED

That late goal destroyed PSG's chances of a quadruple this season. However, still in the Champions League, and with a tasty draw against Manchester United, they could still win a treble.

The French champions currently sit top of Ligue 1 with a 13 point margin, as well as having two games in hand on Lille, who are second. So it's not all bad for PSG, but this defeat in the Coupe de la Ligue will hit them hard, right in the ego.