The game was suspended until tonight

PSG and Basaksehir players took a knee around the centre circle prior to their rearranged Champions League fixture.

Initially scheduled for yesterday, the game was suspended overnight following an incident of alleged racism from a fourth official towards Basaksehir coach Pierre Webo.

PSG and Basaksehir unite to take a knee during the Champions League anthem, after Tuesday's alleged racist incident. pic.twitter.com/0igIfpADcE

Ex-Cameroon international Webo was sent off by the fourth official prior to the alleged racist abuse.

Basaksehir striker Demba Ba, who was on the subs bench at the time of the incident, confronted the officials and could be heard on video saying: "You never say: 'This white guy.' Why when you mention a black guy, you have to say 'this black guy'."

Ba then led his teammates off the field.

Pierre Webo remonstrates with officials after being sent off in Tuesday's abandoned fixture. (Photo by Xavier Laine/Getty Images) 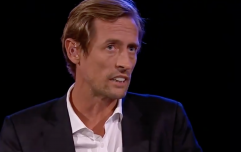 END_OF_DOCUMENT_TOKEN_TO_BE_REPLACED

According to various reports, the two sides were set to resume the game, with some of PSG's players warming up for the game's resumption in the tunnel, before news came through that the away side would only return if the fourth official in question was not on the field.

Uefa wanted to restart the game on Tuesday, suggesting that fourth official Sebastian Coltescu swapped places with the video assistant referee. However, players did not want him to have any role in the remainder of the game - and so it was abandoned, and rescheduled for Wednesday evening instead.

According to Get French Football News, a number of PSG players, including Kylian Mbappe, said that they "cannot play" if the fourth official was present.

END_OF_DOCUMENT_TOKEN_TO_BE_REPLACED

The game resumed this evening, and prior to kick off players from both sides took the knee in the centre circle. They were joined by match officials who reciprocated the gestures.