Peter Schmeichel's defence of his son was not well-received

Football supporters can be hard to please.

Even the most irrational viewer of Monday Night Football mustn't have expected Peter Schmeichel to publicly lambaste his son for the free kick he conceded to West Brom this week.

END_OF_DOCUMENT_TOKEN_TO_BE_REPLACED

Leicester fell behind to a long range Nacer Chadli strike which beat the four-man wall and nestled in the back of the net, with Foxes goalkeeper Kasper Schmeichel unable to even dive.

Schmeichel gambled that Chadli would go to his right and he stepped across his goalline in that direction, only to see the ball sail past him and into the opposite corner.

With Schmeichel's father, Manchester United legend Peter, in studio with pundit Jamie Carragher, the decision was made to link up with the Leicester stopper after the game for some analysis on his performance.

END_OF_DOCUMENT_TOKEN_TO_BE_REPLACED

After Kasper tried to make sense of how he was beaten, dear old Dad came to his defence and while most humans would have viewed the exchange as heartwarming, fickle football fans were not impressed.

"Don't get too down about it because I think the quality of the strike is such that it's hardly possible to save it," Peter said. "[Chadli] aims it about two yards outside of the post and hits it there, and I don't know if it's the wind or the break of the ball that takes it back in.

"Sometimes you've just got to hold your hands up and say you've been beaten by a quality free-kick.

"Don't get too down about it" 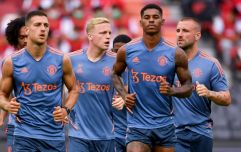 END_OF_DOCUMENT_TOKEN_TO_BE_REPLACED

"You can argue about whether you want a wall or not, but Kasper had a good point that you then give him the opportunity to have a different shot at goal, and then you wonder whether that was the right decision.

"There was a guy in the wall blocking [Kasper], I played in a Champions League final against Bayern Munich where they scored a similar kind of goal. It was closer in but there were two guys blocking me and I couldn't see it, and all I could think about when people criticised me for it was that they've never been in that situation!"

Schmeichel is either the biggest Chadli fan-boy or his son is in goal... 🤔 #MNF

Peter is actually defending Kasper on that free kick!! He should have saved it all day long end of!