"We literally only talked about him inventing the overhead kick!"

Ah, the overhead kick - responsible for many a memorable goal. Think Cristiano Ronaldo against Juventus last year, Gareth Bale against Liverpool in the Champions League final, Wayne Rooney in the Manchester Derby. There really is no finer way of scoring a goal. 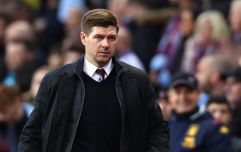 END_OF_DOCUMENT_TOKEN_TO_BE_REPLACED

And none of those strikes would have been possible without the great Doug Ellis. Apparently.

The former Aston Villa chairman passed away last year and is fondly remembered by many of those who knew him.

Speaking on That Peter Crouch Podcast, Peter Crouch first met him when he signed for Villa as a fresh faced 21-year-old, and recalled how Ellis told him (and seemingly everyone else) that he invented the overhead kick.

"I went in to meet him and he said "everyone out"," Crouch says. "So it was just me and him and we had a chat."

"Then I came out of the chat and he chief executive Graham Taylor was there and the secretary and they both said "did he tell you he invented the overhead kick?"

"We literally only talked about him inventing the overhead kick!"

You can watch Crouch's tale in the video below.

Did an ex-#AVFC chairman invent the overhead kick? 🤔

Crouch played for Villa between 2002 and 2004, when he left for Southampton. Now 38, he currently plies his trade for Burnley, who he joined from Stoke in the January transfer window.