N'Golo Kanté meets fans at local mosque, joins them for dinner and Match of the Day

What a lovely human being

It's become widely accepted that N'Golo Kanté is one of the nicest people in the world of football. That grin. Those tackles. He just goes about his business quietly and efficiently, there's nothing to dislike about him.

He strengthened his claim to the title of nicest footballer this weekend, when he accepted a fan's invitation to join him for dinner after they met at a local mosque.

Twitter user @Jahrul999 posted a picture of himself with the Chelsea midfielder in his living room, with the caption: "World Cup winner, former premier league player of the year, 2 time premiership winner casually joined us to watch MOTD after visiting a local mosque. True definition of being humble. What a man."

Kanté joined the family for a curry dinner before watching Match of the Day with them. When asked whether he would join Liverpool, the team @Jahrul999 supports, Kanté said he "would think about it".

Not to mention he ate curry loooool. Asked him to join Liverpool and he said he will think about it. 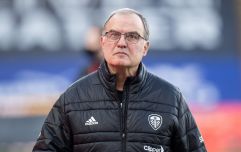 END_OF_DOCUMENT_TOKEN_TO_BE_REPLACED

The whole situation arose after Kanté missed his Eurostar to Paris, and went to his local mosque, where he met the family, according to Twitter user @abz_gunner.

"When your friend's younger brother meets Kanté in the mosque for evening prayers and invites him over for dinner," he tweeted.

"What a humble person Kanté is."

So there you have it. N'Golo Kanté is just as nice as you had imagined. Premier League winner, world champion, but humble enough to join a local family for dinner and Saturday night TV.

There aren't enough Kantés in football, so let's cherish the one we have.


popular
Bruno Fernandes explains why he let Marcus Rashford have penalty
Meghan Markle reveals that she suffered a miscarriage during the summer
Zlatan Ibrahimović objects to use of his likeness in FIFA 21
Can you get more than 12/15 in this childrens' TV quiz?
Former Leicester defender tipped to turn to cage fighting after retiring from football
QUIZ: Name these 50 Premier League players from the 2000s – #3
QUIZ: How well do you know Karate Kid?