Something tells us he's too good to play in France.

Neymar may have already outgrown Ligue 1. The Brazilian has only played two games for Paris Saint-Germain in the French top flight, but he is proving that much better than his opponents it's starting to look like he's taking the piss. 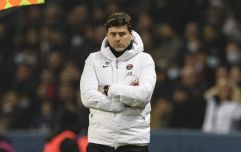 END_OF_DOCUMENT_TOKEN_TO_BE_REPLACED

The same can be said of PSG's fifth goal.

Layvin Kurzawa scored with a fantastic bicycle kick, but it was overshadowed by the amazing delivery by Neymar. The Brazilian drilled a cross into the penalty area with the outside of his right foot, putting it on a plate for Kurzawa to acrobatically score.

Fantastic technique by both players.

Here's another look at it:

However, like for Neymar's second goal and a lot of his future goals in France, the defending was pretty abject.

But Neymar has turned on the style since his world record transfer from Barcelona. He can only beat the opponents that are put in front of him, and it looks like he's enjoying himself.

Expect more examples of Neymar being too good for French football as the season progresses. People were very impressed by his delivery for Kurzawa's goal.

Can we just appreciate Neymar's delivery from a corner-kick, and then Kurzawa's goal.

Just seen Neymar's corner from last night... forget his goals the technique on that was incredible

popular
Woman left mortified after realising why postman ‘rudely’ chucked parcel through door
Woman horrified to find shop employee scrolling through her intimate photos for 15 minutes
Here's how to see who's been taking screenshots of your Instagram Stories
Jamie Carragher and Roy Keane clash over Cristiano Ronaldo's role at Man Utd
Evra bizarrely congratulates Messi for winning Ballon d'Or, despite winner not being announced
Roy Keane cracks up Carragher and Hasselbaink with league title joke
Face masks to be compulsory in England from Tuesday
You may also like
Sport
PSG adamant Mauricio Pochettino will not leave for Man United before end of season
Sport
Mauricio Pochettino plays down Man United links, claiming he is 'happy' in Paris
Sport
Eric Abidal pleas for forgiveness in Instagram post to wife
Sport
Man United identify Mauricio Pochettino as their number one target to be the club's next manager
Sport
Eric Abidal to be questioned in relation to attack on PSG women's player
Next Page