We believe the words are 'absolute' and 'thunderbastard'. 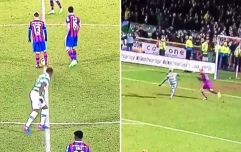 This goal is proof that either Moussa Dembele is world-class, Scottish football is pish, or perhaps both

END_OF_DOCUMENT_TOKEN_TO_BE_REPLACED

We already have the Ligue 2 goal of the season and it's not even August yet.

Patrik Eler is a Czech striker, newly signed for Nancy from the magnificently-named Wacker Innsbruck, and this goal from his debut against Orleans will live for long in the memory.

The frontman lined up a free-kick from all of 35 yards and, when he let fly the ball stayed so hit that he don't know how Eler didn't burst the net.