Netflix has added another must-see football series, this time on the World Cup

If, like many a football fan, you've used the Christmas break to binge-watch the excellent Sunderland 'Til I Die in its entirety and are now at a loss as to what to watch next, fear not - this should help fill the void.

Netflix has released another football documentary series, this time about the World Cup.

Becoming Champions, which is available to watch on Netflix now, takes a look at the stories behind the players and countries that have won the World Cup.

Made up of nine episodes, the series takes an in-depth look at each nation to have won the tournament with episode five - 'You only win once?' looking at England's triumph on home soil in 1966. Interviews with several World Cup winners - including Lothar Matthäus, Rivaldo and George Cohen - feature throughout the series.


🇺🇾🇮🇹🇩🇪🇧🇷🏴󠁧󠁢󠁥󠁮󠁧󠁿🇦🇷🇫🇷🇪🇸
Only eight countries have ever won the #WorldCup. A new series on Netflix called "Becoming Champions" looks at the stories behind those teams. Perfect holiday viewing! 📺🤶🎅pic.twitter.com/DRCCbxyc7X 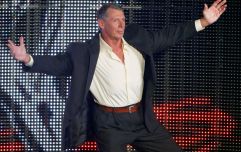 END_OF_DOCUMENT_TOKEN_TO_BE_REPLACED

Looks good, doesn't it? The perfect excuse to lie on the couch, stuff your face with a few more chocolates from the Christmas tub, and waste away another day or two until the new year.

This is just the latest football documentary to land on Netflix. As well as the recently released look at Sunderland, they have also made behind-the-scenes series on Juventus and, more recently, Argentinian club, Boca Juniors.

popular
Deep fake meme lads sing sea shanty that will make you want to abandon your childhood sweetheart and circumnavigate the globe
QUIZ: Name the films referenced by The Simpsons
QUIZ: Identify which of these 50 players played with Wayne Rooney
A definitive ranking of every swear word from worst to best
Here's how to see who's been taking screenshots of your Instagram Stories
Netflix announces new true crime documentary about terrifying LA hotel
Rishi Sunak planning one-off £500 payment to benefit claimants
You may also like
Entertainment
Netflix announces new true crime documentary about terrifying LA hotel
Entertainment
Netflix has increased its monthly subscription costs for viewers in the UK
Entertainment
Bridgerton streamed by 63 million households in record-breaking Christmas for Netflix
Entertainment
Netflix’s new true crime doc examines one of the most infamous serial killers in US history
Film
PSA: Jurassic Park will leave Netflix on New Year's Day
Next Page