WATCH: Neil Lennon hit by object thrown from the crowd as he taunts Hearts fans

Hibernian manager Neil Lennon was struck by an object thrown from the crowd during a dramatic end to Wednesday night's Edinburgh derby with Hearts at Tynecastle.

END_OF_DOCUMENT_TOKEN_TO_BE_REPLACED

The game ended goalless, but many Hearts supporters mistakenly believed their team had scored a late winner, failing to spot that Clevid Dikamona's 91st-minute header had been ruled out for offside.

Lennon was seen gesturing for the home supporters to calm down in the immediate aftermath of the disallowed goal, only to fall to the ground seconds later after being hit by an object thrown in his direction.

Neil Lennon goads the Hearts fans then gets hit by a coin. pic.twitter.com/jj6hrEIcQy 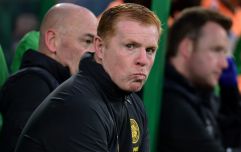 END_OF_DOCUMENT_TOKEN_TO_BE_REPLACED

Footage posted to Twitter appears to show that the object that hit him was a coin.

Hearts, the Scottish Premiership leaders, were unable to take advantage of the fact their city rivals played the last 25 minutes with ten men: Florian Kamberi sent off controversially after receiving two yellow cards.

Craig Levein's side are now four points clear of Celtic, although have played one more game than the Scottish champions. The draw leaves Lennon's side in fifth, eight points adrift of the top of the league.

popular
Jordan Peterson suspended from Twitter over Elliot Page comment - says he won't apologise
Wildlife trophy hunter who killed lions and elephants gunned down in 'execution-style' murder next to car
Premier League player arrested on suspicion of rape
Swiss football fan slept rough in Milan for 10 years after getting lost at San Siro
Moment fighter jet appears at the wing of easyJet flight after teen passenger ‘made bomb threat’
Drag queen does poppers live on Channel 4 - tells mum 'I've bloody made it'
Threesome sees 60-person brawl break out on cruise ship, says passenger
You may also like
Sport
Garth Crooks claims Celtic should ditch Neil Lennon and appoint a 'winner' like Steven Gerrard
Sport
Scott Brown has "nothing to defend himself for" after Old Firm, says Neil Lennon
Football
Celtic fans send message to 'fraud' Brendan Rodgers with banner at Tynecastle Park
Sport
Neil Lennon will take charge of Celtic until the end of the season
Sport
Brendan Rodgers expected to join Leicester City after Celtic give green light
Next Page