A hero on and off the pitch

Mohamed Salah bravely stepped in to save a homeless man from being harassed by a group of men, CCTV footage has revealed. 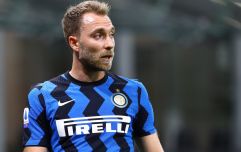 END_OF_DOCUMENT_TOKEN_TO_BE_REPLACED

Following Liverpool's 3-1 win over Arsenal on September 28, Salah was seen at a petrol station near Anfield, where David Craig, who was been sleeping rough for six years, was being taunted by a group of thugs.

The Liverpool star then stepped in and told the abusers that they could one day end up homeless, before withdrawing £100 to give to Craig.

“Mo had seen a couple of the lads hassling me," Craig told the Sun.

“They were calling me names, asking why I was begging and telling me to get a job.

"Mo was every bit as wonderful as he is for Liverpool on the pitch.

"He heard what a group of lads were saying to me, then turned to them and said, 'That could be you in a few years.'

"I only knew I wasn't hallucinating when Mo incredibly handed me £100. What a complete legend.

"He saw what was happening and said something to them and then he went to the cash machine.

"Mo is a real-life hero in my eyes and I want to thank him."

Salah has only added to the legend that surrounds his name on Merseyside. The player has become a fan favourite, not just for his goalscoring exploits but for moments like this, where he goes above and beyond to help those less fortunate than him.

popular
Prince Andrew 'flew with sex slave' who was 'frozen with fear', court told
Germany to announce nationwide lockdown for unvaccinated
Christian Eriksen is training alone at his former club
Alec Baldwin claims he never actually shot gun on Rust set
Harrowing video shows teen blasted in the face with shotgun - and survive
Elon Musk shares 'evidence' we are actually living in a simulation
Woman wins millions after suing mum's GP for allowing her to be born
You may also like
Sport
Michael Carrick defends Cristiano Ronaldo against pressing "myth"
Sport
Jurgen Klopp riled by line of questioning in pre-match Everton interview
Sport
Jadon Sancho: "Arsenal were interested in him. You hear that and assume it's a formality"
Sport
Second half of Southampton Leicester delayed due to medical emergency
Sport
Watford Chelsea game suspended due to medical emergency in stands
Next Page