...Or at least we'll pretend that's the case to justify in our own minds that what follows is worth writing up into a couple of hundred words.

The blackcurrant-based soft drink in question is, of course, Ribena, which we learned was Milner's go-to celebratory drink within minutes of Liverpool's semi-final second leg in Rome's Stadio Olimpico.

Speaking to BT Sport after full-time, Milner, who most of us have only recently realised is a comedy genius, explained that he might have a "Ribena or two" to mark his side's passage to Kiev.

Undoubtedly very important news, the footage of his interview was shared high and wide across social media - so much so that 'Ribena' was trending before long.

Now, on the eve of Liverpool's final against Real Madrid, Ribena have envisaged what Milner will be dreaming of as he gets some kip before what is probably the biggest game of his career and put it into tweet form.

It is, as the number of retweets it has already received suggests, quite magnificent...

A picture shows Milner dreaming of himself holding the European Cup while riding a giant Ribena bottle through the Kiev skies. 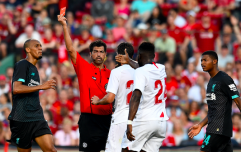 Sorry, but Joris Gnagnon's 'horror tackle' against Liverpool was... good

END_OF_DOCUMENT_TOKEN_TO_BE_REPLACED

And now, to boost the word count with stuff you already know...

Liverpool will look to win their sixth European Cup when they face Real Madrid, who will be looking to win their third Champions League title on the spin. Zinedine Zidane's men were victorious in Milan in 2016 and Cardiff last year, when they also won the La Liga title.

Although Barcelona have beaten them to the Spanish league title this season, another European Cup will more than make up for that disappointment.