A Middlesbrough fan has been arrested for urinating in the water bottle belonging to QPR goalkeeper Alex Smithies. 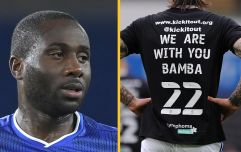 END_OF_DOCUMENT_TOKEN_TO_BE_REPLACED

A video that was shared on social media shows a man holding the bottle near his groin, before putting the lid back on and throwing it towards the goal. This action was greeted by cheers from other fans.

These actions were caught by a fellow away fan at Loftus Road on Saturday during Middlesbrough's 3-0 away victory over QPR. According to reports from those in the vicinity, stewards ejected the fan who has now been arrested and charged.

The fan will appear in court next month.

Cleveland Police's Football Officer tweeted that they hope a banning order will be imposed on the fan, with the goal of preventing him from attending any more Boro matches in the future.

After an investigation @MPSFootballUnit can confirm that the male arrested at the @QPRFC v @Boro game yesterday has been charged with throwing an item on to the pitch. The male has been bailed and will appear at court next month.

A similarly vile event occurred at Wembley a few months ago during Spurs and West Ham's Carabao Cup clash, when a video of a Spurs fan urinating into a plastic beer cup and then hurling it towards the away fans went viral on social media.