As much as fans love to level abuse in Michael Owen's direction for his divisive punditry, most will probably cut him a little slack for his horseracing debut.

Owen took to the saddle on Friday afternoon in the Prince's Countryside Trust charity race at Ascot and impressed with a runner-up finish on board the Tom Dascombe-trained Calder Prince. END_OF_DOCUMENT_TOKEN_TO_BE_REPLACED

The former Liverpool, Real Madrid and Manchester United forward insisted that he may be tempted to give it another go, after comparing the experience to his opening goal in the 2002 World Cup quarter-final against Brazil

"The horse was great and I'm really pleased with how it's gone. I can't keep the smile off my face, I loved it," Owen said. 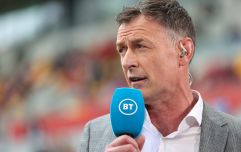 END_OF_DOCUMENT_TOKEN_TO_BE_REPLACED

"It was almost like playing in the World Cup quarter-final against Brazil when your phone goes mental for a day or two with hundreds of texts. I think my phone is cooling down somewhere."

Owen gave a great account of himself and briefly threatened to take a late lead from eventual winner Golden Wedding under Tom Chatfield-Roberts but it was in the final seven furlongs that the leader's pace proved too much and Owen had to settle for second.

He continued: "They seemed to go really quick, it was the fastest I've ever been on a horse, but the horse slowed into the back and whipped up on the inside and all of a sudden I was in front - I was thinking 'come on now'. But that was a long way (out) and I got very tired in the last furlong.

"I enjoyed it enough to say I would do it again. It would be a shame to stop riding after that. However, I've got four kids and I don't want to hurt myself. I absolutely loved it and I wouldn't put it past me."

"It was better than I expected." - @themichaelowen says he loved riding in The Prince's Countryside Fund Charity Race @Ascot and wants to ride in a Charity race again. pic.twitter.com/9AuumwVaa5