Right. So, as things stand, this Copa Libertadores final second leg is actually going ahead then...

After the game between Boca Juniors and River Plate was eventually called off a couple of weeks back, there's been plenty of speculation as to whether or not the game would happen and - just as importantly - where it would be played if it did go ahead. 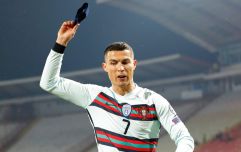 END_OF_DOCUMENT_TOKEN_TO_BE_REPLACED

With CONMEBOL opting against the idea of playing the game in Argentina, it was decided that Santiago Bernabeu, home of Real Madrid, would play host to the game - the first time the a Libertadores match will be played outside of South America.

Not everyone's happy about it (especially River Plate), but with the game scheduled for Sunday, it seems the final will finally be concluded this weekend.

As if the thought of two fierce local rivals meeting in one of the biggest club games in world football wasn't already interesting enough, Florentino Perez has reportedly given us another reason to make sure we end up watching it.

The Real Madrid president, who gave his blessing for the game to be played in Madrid, is said to be trying to arrange for Cristiano Ronaldo and Lionel Messi to sit side by side as they watch the game.

Ronaldo left Madrid in the summer but AS report he will return to the stadium for the first time to watch the game on Sunday after playing for Juventus against Inter Milan on Friday. Messi, who will play for Barcelona against Espanyol on Saturday, will also travel to Madrid for the game.

Perez is said to be trying to arrange for the pair to sit next to each other during the game 'as a gesture of respect' for their dominance of world football's individual awards over the last decade. If they do, it's an image that's certain to be splashed across social media as much as anything from the game itself.

popular
What Netflix’s Seaspiracy gets wrong about fishing, according to a marine biologist
People fighting over name of game where you knock on someone's door and run away
Jake Paul accused of sexual assault by TikTok star Justine Paradise
Man faces three years in jail in Dubai for legally smoking marijuana in his own country
Flatpack expert charges people to assemble Ikea furniture after job loss
QUIZ: Can you get 20/20 in this desperately tricky capital cities quiz?
Covid lockdown 4: Could it really happen and how can we prevent it?
You may also like
Sport
Cristiano Ronaldo throws tantrum after last minute goal didn't count
Sport
Ronaldo and Juventus declines coalesce in Porto elimination
Sport
Rio Ferdinand breaks down THAT Cristiano Ronaldo wonder goal against Porto
News
Cristiano Ronaldo under police investigation over ski trip which may have broken Covid rules
Sport
QUIZ: Identify which of these 50 players played with Cristiano Ronaldo
Next Page