Look, Kylian. You're good. We get it, we really do.

Really though, is there any need for this? 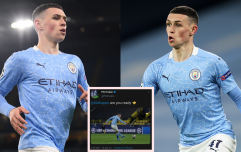 END_OF_DOCUMENT_TOKEN_TO_BE_REPLACED

Yep, fresh from dishing out another reminder of how ridiculously good he is against Manchester United in midweek, Kylian Mbappe - Paris Saint-Germain's World Cup-winning, fourth-on-the-Ballon-d'Or-list-and-still-only-20-years-old striker - posted the above to his Twitter account on Saturday: confirmation that he's now scored 100 goals in training sessions while with the French champions.

It's unclear at this stage if the decision to get a PSG shirt printed with the Pele-esque milestone on the back was the idea of Mbappe or his club, but the caption does suggest the former Monaco striker isn't taking it too seriously.

Needless to say, plenty of people who spotted the tweet were making comparisons between the young Frenchman and the Brazilian legend.


Take back everything I've ever said, Kylian Mbappé really is the new Pelé https://t.co/E8sB4WS6mW

Wow. He really is the next Pele. pic.twitter.com/KDXEZMBRPw

Pele was right when he said Mbappe would be the new Pele https://t.co/dLp9eJzYS8 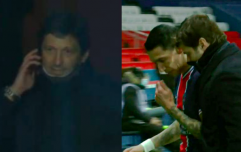 END_OF_DOCUMENT_TOKEN_TO_BE_REPLACED

Mbappe and his PSG teammates return to action - real, non-training ground action - on Sunday, facing St-Etienne away in Ligue 1.

This tweet was send on the same day reports from France emerged that PSG were looking at signing another talented young striker called Kylian Mbappe. Two Kylian Mbappes in the same team. Now there's a thought to keep defenders awake at night.