Icardi's future is in doubt at the San Siro

Mauro Icardi has been stripped of the captaincy at Inter Milan, the club have announced. 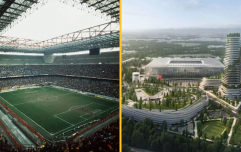 END_OF_DOCUMENT_TOKEN_TO_BE_REPLACED

The striker was made captain at the start of the 2015/16 season by the Serie A giants but Inter released a short statement via a tweet on Wednesday which said that goalkeeper Samir Handonovic would replace him with immediate effect.

Icardi's future with the club has been in doubt in recent weeks given uncertainty over whether he'll sign an extension to his current contract, which expires in 2021.

The latest development suggests Inter's hopes of reaching an agreement with the Argentine, who has been linked with Barcelona, Real Madrid and numerous English clubs in recent months, are diminishing.

Along with this development, reports in Italy claim Icardi will also play no part in Inter's Europa League game with Rapid Vienna on Thursday.

END_OF_DOCUMENT_TOKEN_TO_BE_REPLACED

Icardi has been with Inter since 2013, when he joined from Sampdoria. The 25-year-old has scored 119 goals for the Nerrazzuri.

Having scored three times in his last ten appearances for the club, his manager Luciano Spaletti suggested at the weekend that his contract talks are having an impact on his performances.

"Mauro is evidently seeing his performance affected by some situations that have been going on recently," Spaletti said.

"He needs to free himself from the talk that is around him. The directors agreed to start talking about the contract, so now they need to go there and conclude it."