West Ham's game with Burnley descended into chaos on Saturday afternoon at the London Stadium.

With around 20 minutes to play, the match was interrupted by a pitch invasion from several West Ham supporters. The home side lost 3-0 to Burnley and it was too much for some supporters, who directed their anger towards the club's owners sitting in the directors' box. 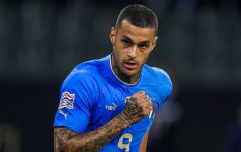 END_OF_DOCUMENT_TOKEN_TO_BE_REPLACED

At least two fans invaded the pitch after Ashley Barnes gave Burnley the lead. One fan grabbed a corner-flag and ran to the centre of the pitch, and there were more attempts to disrupt the game when Chris Wood got his second of the day to make it 3-0. West Ham are now 16th, three points above the relegation zone.

The club's co-owner David Sullivan was escorted from his seat before the end of the match. Club captain Mark Noble was also involved in an altercation with a pitch invader.