Mario Mandžukić has been a key figure at Juventus over the past couple of seasons, playing an unorthodox wide target man role from the left wing. His position in the side will now be under threat with the arrival of Cristiano Ronaldo from Real Madrid, but he doesn't seem too fussed.

When asked by a journalist at the World Cup what he made of Juventus signing the five time Ballon d'Or winner, he simply responded: "I don't care."

In fairness, Mandžukić has the biggest game of his life ahead of him this afternoon as Croatia take on France in the 2018 World Cup final. It should therefore be no surprise that his mind isn't focussed on Juve's transfer activity at the moment, but his response was still surprisingly blunt.

Max Allegri has made assurances that Mandžukić will remain at Juventus next season though, promising to move the player back to his natural position:

"Mandzukic will surely remain at Juventus, from next season he will be playing as a striker again, no more as a winger," Allegri said a few weeks ago. 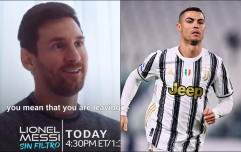 Lionel Messi names four athletes he admires the most

END_OF_DOCUMENT_TOKEN_TO_BE_REPLACED

Ronaldo is set to be unveiled to the Turin club's supporters on Monday with it emerging in recent days that the Serie A champions had a clear run at signing the 33-year-old, with Paris Saint-Germain, Napoli and former club Manchester United reportedly turning him down.

Ronaldo's arrival at Juventus hasn't been well received by everyone. It was reported last week that workers at Fiat Chrysler's factory in Melfi planned to strike from Sunday to Tuesday in protest at the money being spent on the deal.