"He is not the black version of a white man, he is David Alaba. Period." 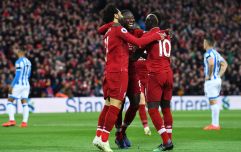 END_OF_DOCUMENT_TOKEN_TO_BE_REPLACED

The Austrian defender has now been officially unveiled as a Madrid player after completing his free transfer from Bayern Munich, where he won 10 Bundesliga titles and two Champions Leagues.

He has inherited the number four shirt at the Bernabeu, vacated by Ramos when he completed his recent switch to Paris Saint-Germain.

An opinion piece by Carlos Carpio was published by Marca to mark Alaba's unveiling, stating that the defender's challenge having made the transfer from Germany was to become "the black Sergio Ramos".

The choice of comparison - and the fact it was used to form the article's headline - was condemned by many, who rightly pointed out how completely unnecessary it was to refer to the race of a player.

No one:
Absolutely no one:
Marca: I know, let's call David Alaba 'the black Sergio Ramos' 🥴🤦‍♂️ pic.twitter.com/6iznOubc6S

@marca you’ve known Alaba was coming for weeks and this is the best headline you came up with 🤦🏽‍♂️ would’ve been nice if one he’s not being compared to Sergio Ramos because they are completely different players and two he was referenced by his name and not his skin color 🤦🏽‍♂️ #Alaba pic.twitter.com/6iHD5boUli

I don't know if this is the doing of the author or the social media admin, but this is awful. The new Ramos, Ramos 2.0 - fair enough. But to reduce Alaba to his skin colour? Disgraceful. https://t.co/duryXYoRG3

What the fuck?! Both disrespectful and racist from Marca 🤦‍♂️ How does this get approved??

David Alaba is an incredible player in his own right, to compare him to Ramos is disrespectful for starters.. but to highlight his skin colour as the defining characteristic is tone deaf pic.twitter.com/kJ3FIgIUyy

He hasn't even kicked a ball yet and the Spanish media won't stop reminding us that he is black. https://t.co/vyLv4edXO5

He's a success in his own right! Why do they feel they need to compare a black person to a white person in order to give him kudos?