Women! On telly! Two of them!!

Sky Sports News is something of a staple in most of our lives. In fact it's often hard to escape it. Whether at home, at the gym, or frequenting a public house, it's there, always on in the background.

As with anything so omnipresent, there are certain aspects of it that we take for granted. The yellow bar with breaking news (that often isn't very breaking); Jim White's cheesy patter; Dharmesh Sheth with the transfer news. 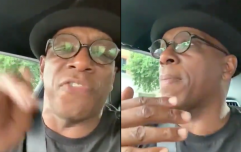 END_OF_DOCUMENT_TOKEN_TO_BE_REPLACED

But there's one rather unspectacular thing that has happened on the channel that seems to have taken some male viewers somewhat aback. In fact it is such a revelation to them that they're finding all a bit overwhelming.

It's because they've noticed that instead of just one woman in a presenting partnership, sat beside a male colleague, the channel is pairing TWO WOMEN together! Yes you read that right - TWO WHOLE WOMEN!

We'll let give you a moment to take in such staggering news.

In particular the recent combo of established SSN presenters Kate Abdo and Anna Woolhouse has got some blokes in a bit of a tizzy. In fact, it is the breaking news.

Whatever next - a female Prime Minister?!

The two women presenters on sky sports are unreal!! 😍

There are two women on sky sports talking about football. Two woman I said...incredible...women...football...talking....

uuuuuuuuhhhhhh .... what a feast for my eyes .... amazing both

(...funnily enough, there isn't the same reaction when it's two men presenting together. Strange that.)

popular
This is how Team GB is doing at Tokyo compared to Rio and London
Met Office issue exact date for upcoming August heatwave
What are the dark circles on swimmers' backs at Tokyo Olympics?
First trans Olympian Laurel Hubbard given ovation after first-round knock out
A definitive ranking of every swear word from worst to best
Petition against trans weightlifter Laurel Hubbard competing in Olympics pulled for 'hate speech'
A ranking of 9 of the best new football shirts for the 2021/22 season
You may also like
Sport
Natalie Sawyer was all class during the first transfer deadline day since her departure
Sport
Christian Benteke sends warning to Sky Sports News reporter
Sport
WATCH: Crystal Palace player splashes Sky Sports reporter as he arrives for training
Sport
Sky Sports News apologise for error in report on Raheem Sterling tattoo
Sport
Kirsty Gallacher is leaving Sky Sports
Next Page