Luke Shaw played the Euros for England with broken ribs

Shaw the soldier fights on through broken ribs

England left-back Luke Shaw reportedly played against Ukraine, Denmark and Italy at Euro 2020 with broken ribs. Despite his alleged injury, Shaw was a driving force behind England's success at the Euros.

END_OF_DOCUMENT_TOKEN_TO_BE_REPLACED

With one goal and at least three assists, Shaw was an undeniable powerhouse throughout the 2020 Euros. The Telegraph, however, reports that for the final three games, Shaw was suffering from broken ribs. Shaw is currently on a well-deserved break, though it is believed more will become known when he returns.

It is thought that the 26-year-old received the injury in the last-16 victory over Germany.

Manchester United are waiting for Shaw to return from his summer break to find out the extent of the damage.

Shaw is currently on holiday with fellow England players Mason Mount, Declan Rice, and Kyle Walker. Footage from a bar surfaced that had the nation falling in love with the Three Lions all over again. They are seen to be relaxing until a song begins to blare over the stereo.

Banging on the tables and raising their hands in the air, the boys begin singing the build-up to Sweet Caroline's iconic chorus. As a shirtless Kyle Walker approaches with a cheesy grin, the energy level is amped up.

The comments beneath the video vary in tone, illustrating how a majority of fans were still very much disappointed in the Euros final. But the squad clearly weren't going to let their defeat ruin their well-earned break.

"Enjoy yourselves lads. Home tournament, everything in your favour. Still couldn’t bring it home," wrote one very negative Nancy. 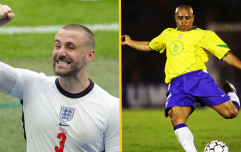 END_OF_DOCUMENT_TOKEN_TO_BE_REPLACED

"Well deserved.... But what the fuck is Rice wearing?" asks one user. Though I am sure he would be the first to buy Rice's collab with ASOS should he launch one.

"Love this … long hard non-stop season for all of the them and they deserve to have blow out!! Good on them!!"