"For me, he could be brilliant, but his manager will still find something wrong with him."

On Saturday night, Paul Scholes spoke a lot of sense about Luke Shaw's situation at Manchester United. Shaw started United’s 2-0 FA Cup win over Brighton and Hove Albion at Old Trafford, but was substituted at half-time for Ashley Young. Following the match, Jose Mourinho criticised the 22-year-old full-back, stating that he removed him from the game because he wanted to make his defence more “solid.”

"It was a decision of one player for another player in the same position," Mourinho told BT Sport. "I wanted to defend better, I want my defensive line to be more solid in relation to a few, not many."

Yet, Mourinho could be seen urging Shaw to push-on and join the team’s attack during the first-half, and Young didn’t do an awful lot better or worse when he came on.

The United manager also isn’t known for wanting his full-backs to attack, as these heatmaps of the club’s Champions League defeat to Sevilla show - Young and Antonio Valencia rarely crossed the half-way line. 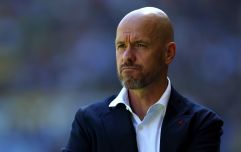 END_OF_DOCUMENT_TOKEN_TO_BE_REPLACED

It seems that Shaw just can’t do anything right in the eyes of his manager and has regularly been criticised by Mourinho. The England full-back has experienced a very difficult time at Old Trafford. After an indifferent first-season following his £30m move from Southampton in 2014, Shaw started the 2015/16 season in fantastic form. He then suffered a horrific double-leg break during a match against PSV in the Champions League.

He has struggled for form and fitness since returning from that injury and has never been a regular under Mourinho. The former Chelsea manager once even questioned his “football brain.” Shaw had an extension to his contract triggered earlier this season, and his current deal expires in 2019. However, if he’s fortunate he’ll be gone from Old Trafford by then.

Has Shaw been treated unfairly? https://t.co/LAYO66TmJv

END_OF_DOCUMENT_TOKEN_TO_BE_REPLACED

It’s just not going to work out for him under Mourinho, and a player of Shaw’s talent, who has already missed too much football in his career so far, really needs to move on. Scholes said as much on Saturday night, following the FA Cup quarter-final tie between United and Brighton.

"I couldn't see a difference between him and Young," Scholes said on BT Sport

"I think sometimes, managers get in their head that there's a player not for them. For me, he could be brilliant and his manager will still find something wrong with him. It is disappointing because when Luke Shaw came you thought, 'what a left-back this is, he could be the best'. I still believe he could be the best in the world and in the summer he could go to Tottenham or somewhere and he will improve."

You can watch Scholes here:

"I think sometimes, managers get in their head that there's a player not for them."

"It's a relationship that come the summer will end."

"He's just not played many games, just his body shape, he looks like needs to play games."