Logan Paul was served a Stunner by Kevin Owens at WrestleMania. The Youtuber-turned-boxer has been attending the event in Florida as Sami Zayn's "special guest of honour. However after Owens beat his rival Zayn, Logan pushed Zayn to the ground before triumphantly raising the hand of Owen.

This didn't appear to go down too well with the former universal champion though, and he decided to show Logan exactly how he felt, dishing out Stone Cold Steve Austin's iconic move, the Stunner.

And this went down a treat with fans in the stadium and across the world.

END_OF_DOCUMENT_TOKEN_TO_BE_REPLACED

The guys at Arsenal Fan TV seemed to enjoy it as well, showing more excitement and joy and Paul's flooring than they have all season watching the Gunners.

Of course, as with most things in the weird and wonderful world of WWE, you need to leave your brain at the door to truly enjoy the clip. The less you think about it, the less logic you apply, the less sense you use, the better it is. And even in the theatrical world of wrestling, there is still something intensely satisfying about seeing Logan Paul appear to be hurt. 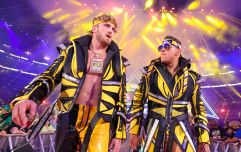 END_OF_DOCUMENT_TOKEN_TO_BE_REPLACED

Paul is currently gearing up for an exhibition fight with legend Floyd Mayweather as his next appearance in the ring. The fight had initially been scheduled for 20 February this year but was postponed, with a new date yet to be decided.