If the name 'Leon Bailey' means nothing to you at this point, rest assured that it probably will by the end of the season

Since joining Bayer Leverkusen from Genk in January of last year, Bailey's performances for the Bundesliga club have caught the attention of a number of the continent's top clubs.

The Jamaican-born forward has been linked with moves to AS Roma and Bayern Munich in recent months, and also confirmed there had been "concrete interest" in him from Chelsea and Liverpool.

Leon Bailey is lighting up the Bundesliga this season ⚡️

Tune in this afternoon for your weekly fix 🙌

Roma seemed to be his most likely next club at one stage in the summer, reportedly giving serious thought to making a bid in the aftermath of their deal for Malcom being hijacked by Barcelona. 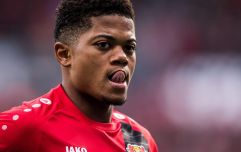 END_OF_DOCUMENT_TOKEN_TO_BE_REPLACED

Despite this, Bailey has stayed put, inking a new five-year contract with Leverkusen last month.

Having committed his immediate future to the club, the 21-year-old opened his scoring account for the new season during the first half of their game against Wolfsburg on Saturday afternoon. He did so in spectacular fashion, too.

Picking the ball up 15 yards from the edge of the Wolfsburg area, he accelerated forwards, dropping a shoulder to move away from a defender and open up space for a shot.  Still outside the area, Bailey curled his effort into the far corner. 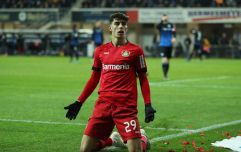 END_OF_DOCUMENT_TOKEN_TO_BE_REPLACED

This was the opening goal of the game, but unfortunately for Leverkusen their lead didn't last for long. An own-goal from Ramazan Özcan levelled the scores 12 minutes later. After half-time, goals from Wout Weghorst and Renato Steffen put Wolfsburg 3-1 up.