We presume this is not GDPR compliant

La Liga have been using their official smartphone app to spy on bars that show football matches for their customers. Millions of Spaniards across the country use the app to keep up to date on live scores, statistics and news from one of the most watched sporting leagues in the world. According to Google and Apple, the app has had more than 10 million downloads.

The app requires permission to use your microphone and GPS settings. A report from El Diario has revealed that La Liga have been remotely activating the microphone setting on users' phones to check that the sound matches up to that of a football match. They then use the GPS tracking to determine the exact location of the establishments that are broadcasting the matches.

In Spain, bars and other public establishments have to pay in the region of €300 per month in order to show La Liga matches, whereas household packages range between €10 and €30.

La Liga has used the controversial tactic of tracking the location of its users to clamp down on bars broadcasting their matches illegally.

As is commonplace with most smartphone apps, the La Liga one requests permission to access your microphone. Once users have agreed, they are in turn giving La Liga permission to activate the microphone at any moment.

La Liga have responded to the reports, claiming that "nobody accesses the audio clips picked up by the microphone", and that "the sound converts automatically into a binary code", which is used to signal which bars are showing illegal streams. 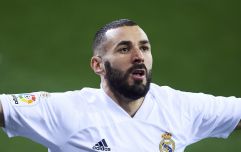 END_OF_DOCUMENT_TOKEN_TO_BE_REPLACED

La Liga also state that this method is only ever used to combat illegal streaming, which they claim costs more than €150m in lost revenue.

When signing up to the app, two options appear at the bottom of the page. The first is for users to confirm that they have read the terms and conditions. The second, which uses the phrase 'protect your team!', gets users to agree to La Liga being able to use their data, including that which comes from access to the microphone and geolocation tracking, as part of their crack down on illegal streaming.

It is only mandatory for users to tick the first box, the second is optional.