Who is Kubo? The Real Madrid teenager embarrassing his teammates

There is a video which has doing the rounds over the past few days showing a small young footballer running rings around the Real Madrid team in training.

You see the likes of Raphael Varane, Marcelo and Keylor Navas - each of them an experienced professional who has won the biggest prizes going - running around as if they are trying to catch smoke.

It's quite a sight, and it prompted questions of 'who the hell is that?' by people around the world. Who is this diminutive little scamp who simply does what he wants? Who is this... this... rudiger?

Well, esteemed readers, that rudiger is none other than Japanese international Takefusa Kubo.


He has already made four appearances for his country's senior national team - so he's not entirely an unknown quantity - but that training video will have been most people's first sight of him and the skills he has to offer.

END_OF_DOCUMENT_TOKEN_TO_BE_REPLACED

His move to Madrid marks the beginning of his second stint with a LaLiga club, having joined FC Barcelona's La Masia youth academy as a 10-year-old in August 2011.

His stats there were fucking insane, as he racked up 74 goals in 30 league games during his first season at the club.

Due to his time spent at La Masia, as well as his style of football, comparisons to Lionel Messi are abundant. That isn't fair however, according to journalist Gabriele Anello who told JOE that while Kubo "might be one of the greatest talents you'll ever see in the next decade", he is a different player to the GOAT.

"And as wrong it might sound, Kubo still has a good package of skills to set: rapidity, unnatural reflexes, deadly dribbling a solid vision of the game to set assists and goals for his team-mates.


"Even living up to 1/10 of the current expectations would leave us with a wonderful player."

END_OF_DOCUMENT_TOKEN_TO_BE_REPLACED

Barca would presumably have kept him were it not for the fact that his move to the club was deemed to have broken FIFA's international transfer regulations for the signing of players under the age of 18. So back to Japan he went.

He joined FC Tokyo, where he spent some time in the reserves before making his senior J.League debut at the age of 15 and five months. Just five months later he scored his first J.League goal, becoming the club's youngest ever scorer.

"He shook the Japanese football world. Not that fans in Japan weren't aware of his profile: commercials featuring him were running in the half-time of Japan NT's matches, despite he hadn't even featured in a first tier game yet," said Anello.

During his time at Tokyo, he scored four goals in 19 games. He also had a loan spell at Yokohama, where he scored a goal against a Vissel Kobe side featuring Andres Iniesta.

A cracking start to the 2019 season, during which Kubo has played a starring role, has also given his former club the chance of claiming their first J.League title.


Upon his departure he received a hero's farewell, an indication of the esteem with which he is held among his former teammates and supporters. 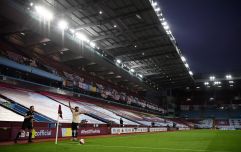 The secrets to mixing crowd noise for football broadcasts

END_OF_DOCUMENT_TOKEN_TO_BE_REPLACED

His return to Japan continues to haunt Barcelona. According to an interview conducted by former academy coach Joan Vila, many at the club had envisaged Kubo being a player that the club would build its foundation around. A talent and icon similar to Messi.

He was as popular among his teammates and staff as he was talented.

Despite alleged requests from his parents for Kubo and his brother to be reinstated into Barcelona's academy after their ban, Vila's replacement at La Masia wasn't interested.

Which makes it all the more disappointing for Barcelona to see him go to Real Madrid, or as Vila told AS: "The whole Kubo episode has been Barça's biggest mistake in a long, long time."

From a potential replacement to Lionel Messi to joining the GOAT's bitter rivals, Kubo has fit a lot into his short career in football.

He has been at Real Madrid for less than a month and already looks to have fit in seamlessly. Notable, too, is his confidence and determination - qualities noted during his time at La Masia - when sharing a pitch with his more illustrious teammates.

There is no tentativeness, no apparent nerves - just a young footballer desperate and ready to burst onto the scene and one who, even at just 18, already looks equipped to do so.


popular
Only the most driven and devoted will get full marks in our Roy Keane quiz
The JOE Friday Pub Quiz: Week 199
QUIZ: Can you identify the ice lolly that's in black and white?
The definitive ranking all 151 original Pokémon from worst to best
A definitive ranking of every swear word from worst to best
Benson Henderson reasons for leaving UFC echo Conor McGregor's issues
PlayStation and Xbox users will now be able to play against each other online