Cast your mind back to early December and you might recall Jurgen Klopp saying Chelsea are favourites to win the Premier League title this season. 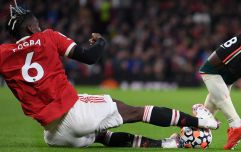 END_OF_DOCUMENT_TOKEN_TO_BE_REPLACED

"If I watch football games at the moment then Chelsea, for me, look like favourites," Klopp said. "They have the biggest squad, great players playing well together after a rusty start - and they are full on.

"They have unbelievable opportunities to change in games and make changes from one game to the other - so that is it."

Whether this was a genuine compliment or an attempt to psyche out a rival who had engaged in a verbal touchline war the season before, we cannot be sure. But I'm going with the latter.

And it seems to have worked.

That's more losses than Liverpool, Man United, Man City, Spurs and Leicester combined. Only Sheffield United have lost more game than Chelsea in that time frame, and they are bottom of the table.

Having enjoyed a nine win unbeaten run before that, what happened?

END_OF_DOCUMENT_TOKEN_TO_BE_REPLACED

Frank Lampard's team seem to have crumbled, with Lampard himself attributing defeats to players not doing the basics and not running hard enough on more than one occasion, as if it's not in his remit to fix that problem.

Is it possible that Klopp's mind games have had such a dramatic effect on Chelsea's form that they've dropped from third to eighth? Yes. But this season has proven impossible to predict in numerous ways.

Manchester United fans were calling for Ole Gunnar Solskjaer to be sacked a few weeks back, they're now top. Man City were supposedly out of the picture, they now look like the favourites to go the distance. Arsenal are suddenly good again, with the kids leading the way.

Maybe nature is healing, as the big guns return to form more reminiscent of the pre-Covid era. But Chelsea are being left behind, and recent performances do not indicate that this is a temporary dip - there is no sense of a coherent plan.

If they do not arrest this slump, Chelsea will not hesitate to dispose of their greatest ever player.

popular
Paul Scholes rips into Pogba after disgraceful performance vs Liverpool
James Michael Tyler, Gunther from Friends, dies aged 59
Tilly Ramsay given 'full apology' after being 'fat-shamed' by LBC radio host
Jeremy Clarkson says 'f**king government' will 'c**k everything up' as he collects award
Putin labels West 'monstrous' for teaching children they can change gender
Men should ejaculate 21 times per month to reduce cancer risk
The JOE Friday Pub Quiz: Week 266
You may also like
Sport
Man Utd's defensive stats are the worst in the Premier League
Sport
'Extremely selfish' Mo Salah is world's best player, Souness claims
Sport
Carragher and Neville claim a Liverpool win will put Man Utd out of the title race
Sport
Solskjaer will never reach the level of Klopp, Pep and Tuchel, Carragher claims
Sport
Joshua Kimmich told to get Covid vaccine as he is a 'role model'
Next Page