After months if not years as a figure of hatred at Newcastle, Pardew looks to have found a proper home at Crystal Palace.

The win at Chelsea showed the best of the club's old and new guard, with Bakary Sako continuing to impress and Yannick Bolasie continuing to offer a real threat under the man who oversaw the Congolese international's first Premier League hat-trick last season.

For all his flaws in the north-east, it is not unreasonable to argue that Palace would currently be a Championship club - rather than second in the Premier League - had Pardew not taken charge when he did.

And with an international break coming up, it would be no surprise to see his name mentioned in connection with the England job.

Not one member of West Ham's starting XI against Bournemouth came away with much credit, but Ogbonna was seemingly made a scapegoat by manager Slaven Bilic, being substituted before half-time.


It could have caused the £11m defender to retreat into his shell, but instead he responded perfectly against Liverpool as the Hammers came away with a quite incredible 3-0 win.

END_OF_DOCUMENT_TOKEN_TO_BE_REPLACED

With West Ham's squad down almost to the bare bones already - just one of their subsitutes at Anfield had ever completed a full 90 minutes in the Premier League - the form of their defensive unit will be crucial to shaping their last season at Upton Park.

While team-mate Victor Wanyama missed the victory over Norwich amid rumours of a bid from Tottenham, reported Manchester United target Mane took to the field and helped inspire a victory that ought to kick-start Southampton's season.

Steven Whittaker's foolish sending-off made a difference for sure, allowing Ronald Koeman's side to go on the attack against a Norwich side which showed few signs of making their back four work after the red card.

But it was Mane's movement and delivery that helped create the first two goals, and his input might be enough for at least one of the Big Four to test Saints' resolve with a deadline-day bid. 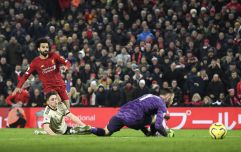 END_OF_DOCUMENT_TOKEN_TO_BE_REPLACED

While many of the headlines after Arsenal's win at Newcastle surrounded Newcastle striker Aleksandar Mitrovic following his early red card, the man at the other end of the field will have left similarly disappointed.

It was Theo Walcott's opportunity to stake a claim for a starting spot up front, but it couldn't have gone much worse for the England man.

A largely anonymous performance was interrupted only by a dreadful miss from point-blank range, and one would imagine Arsene Wenger won't be in a hurry to play him through the middle again.

As Chelsea took to the field against Crystal Palace, most of the talk surrounded whether centre-backs Kurt Zouma and Gary Cahill would give Jose Mourinho something to think about ahead of John Terry's return from suspension.

But that took the attention away from the real weak link in their back-line, at least in the eyes of a number of the club's fans.


Ivanovic was run ragged in the second half as Palace's free-flowing attack secured a shock win, and Mourinho may well opt to move Cesar Azpilicueta back to his natural right-back role when new signing Baba Rahman is available on the left. 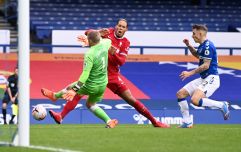 VAR for Merseyside Derby 'didn't know' he could send Pickford off

END_OF_DOCUMENT_TOKEN_TO_BE_REPLACED

When you're in goal for one of the Premier League's biggest clubs, the standards are higher. When you have a certain David De Gea on the club's books, it gets taken that one notch higher.

Sergio Romero has looked uncertain at times this season, but hadn't been properly caught out until the trip to Swansea, when he failed to reach Andre Ayew's header and really ought to have done a lot better with Bafetimbi Gomis' winning effort.

De Gea might want out, but if he's still a Manchester United player at the end of the transfer window then Romero's slip-up might be enough to let the Spaniard back in the first-team.

Rumours of the Liverpool defender's resurgence had, as it turns out, been grossly exaggerated.

The Croatian centre-back was the fall guy for plenty of the Reds' struggles last season, but three clean sheets from the first three games this campaign had led plenty to question their criticism.

That was until West Ham arrived in town, and 2014/15 Lovren returned, allowing Premier League rookie Manuel Lanzini to thrive. Still, it was nice while it lasted.

You may also like
Sport
Sergio Aguero escapes booking after grabbing official Sian Massey
Sport
Which Premier League matches are pay-per-view? Everything you need to know
Sport
QUIZ: Every Merseyside Derby goal scorer this century
Sport
Man Utd and Liverpool forced to give up plans for Project Big Picture
Sport
Government could force U-turn on Premier League pay-per-view games
Next Page