Joe Marler has received his punishment for the "gypsy boy" incident

World Rugby have made their decision, Joe Marler's getting a suspension and a fine.

Marler directed the insult at his Welsh rival and although he apologised shortly after the match and was cleared by Six Nations officials, World Rugby stepped in. 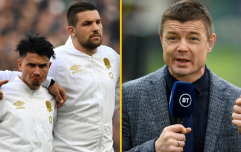 END_OF_DOCUMENT_TOKEN_TO_BE_REPLACED

At the England prop's hearing on Tusday, they found him to have breached Regulation 20 and the code of conduct, which "cover statements that are unsporting and/or insulting and/or discriminatory by reason of race or ethnic origin which bring or have the potential to bring the game into disrepute".

As a result, they handed Marler a two-match ban and fined him £20,000 which is to be paid to a suitable equality charity. The statement provided the following reasoning for the ban: