Liverpool defender Gomez, like many other England fans, congratulated Rooney on reaching milestone. 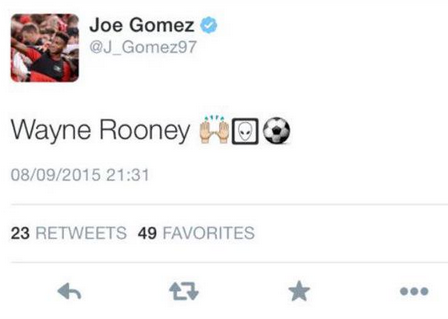 However, some Liverpool fans on Twitter didn't take kindly to a player congratulating the captain of bitter rivals Manchester United and the backlash became so great Gomez deleted the tweet.

@J_Gomez97 mate we don't like Man Utd players, please snap him on Saturday 👍🏻

@J_Gomez97 never say anything positive about an United player

Thankfully, there were also some more level headed Liverpool fans who saw no foul in Gomez's tweet.

Heard Joe Gomez had to delete a tweet wishing Rooney coz of LFC fans' abuse. This is seriously getting out of hand! Who are these morons!?!

That is poor if a minority of our fans did abuse Joe Gomez for tweeting congratulations to Wayne Rooney. #LFC