Jamaica's Elaine Thompson-Herah is a Double Olympic champion, defending the title she won in Rio five years ago with another gold in the women's 100m final in Tokyo. 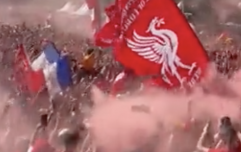 END_OF_DOCUMENT_TOKEN_TO_BE_REPLACED

Thompson-Herah, whose time of 10.61 seconds also clinched a new Olympic record, was also followed by two of her compatriots, with Shelly-Ann Fraser-Pryce and Shericka Jackson taking silver and bronze respectively.

Her two teammates were not, however, in any great rush to offer their congratulations after crossing the line.

As Thompson-Herah wheeled away in celebration, Fraser-Pryce and Jackson kept their distance, preferring to watch the big screen for news of their times. Only a few minutes later did they offer a very brief congratulatory pat on the shoulder.

The frosty reaction was clocked - and enjoyed - by many of those watching:

Brilliantly salty reaction from the Jamaicans to their teammate winning the 100m.

Tell me more about the intra-squad beef in the Jamaican sprint team. #Olympics

A bit awkward between Thompson-Herah and her Jamaican teammates there. Incredible frosty atmosphere #Olympics #Athletics

Someone must know what the Jamaican sprinters beef is? That was some almost Oscar worthy contempt for their teammate’s victory.

While it appears plenty - BBC commentary team included - are of the opinion the trio do not get on, the picture below shows things were slightly less frosty a few moments later.