Grealish said reiterated his unwavering love for the club

Jack Grealish has furiously hit back at an article that suggested he had "insulted" and spoke down about his former club Aston Villa, declaring "I've been a Villa fan my whole life and still am."

END_OF_DOCUMENT_TOKEN_TO_BE_REPLACED

In a tweet on Friday, the England international and now Manchester City player wrote: "This is the worst and most one-sided article I’ve ever seen. Classless? Jealous? Couldn’t wait to get out? Arrogance? How exactly? I’ve been a Villa fan my whole life and still am. The thing is you don’t understand what goes on in the real football world."

Grealish, who helped England to a 4-0 victory against Hungary in their latest World Cup qualifier on Thursday and joined his boyhood club age six, tweeted in reply to Ashley Preece - the Villa correspondent for BirminghamLive - who, somewhat reluctantly, was promoting a piece he had just written.

This is the worst and most one sided article I’ve ever seen.. Classless? Jealous? Couldn’t wait to get out? Arrogance? How exactly? I’ve been a villa fan my whole life and still am. The thing is you don’t understand what goes on in the real football world.

END_OF_DOCUMENT_TOKEN_TO_BE_REPLACED

On his Twitter account, Preece wrote, rather earnestly: "Straight from the heart, this one. I didn't want to write it but was asked to and did. I just felt he spoke down about Aston Villa and I didn't like it."

The article was clearly labelled an opinion piece, so is not subject to standard reporting restrictions. So, it was in fact, one-sided, as it was the opinion of the author.

The headline clearly states that the report is an opinion piece 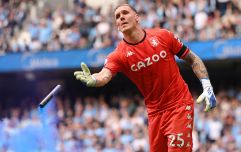 END_OF_DOCUMENT_TOKEN_TO_BE_REPLACED

The opinion piece is highly critical of Grealish who became a poster boy following England's loss at Euro 2020 and earlier this month sealed a massive £100m move to Man City.

There was a real "smugness and arrogance to Jack Grealish that was quite distasteful" Preece opined, at the start of his article, recalling the moment the footballer spoke to TV's Gabriel Clarke ahead of England's 4-0 win in Hungary.

"The former Aston Villa captain was no longer this innocent yet totally engaging footballer Villa fans idolised. In fact, the 25-year-old was quite frankly unrecognisable as he delivered some painful and, to some extent, insulting words about his boyhood club," the opinion piece continued.

"'I couldn't wait to get out,' was the vibe I got from Grealish's interview this week," Preece wrote.