If you fancy a bet for the upcoming Premier League season, you could do worse than back Hull City to make an instant return to the Championship.

The Tigers are a bit of a shambles less than two weeks from the beginning of the new campaign. Steve Bruce, their manager for four years, who secured two promotions and a cup final appearance, recently resigned, and it sounded as though his position had become untenable.

END_OF_DOCUMENT_TOKEN_TO_BE_REPLACED

"I desperately wanted to make it work this summer and be a Premier League manager again but, sadly, it wasn't to be," Bruce said following the decision.

Assem Allam, the club's owner, is currently ill, and Bruce reportedly clashed with his son Ehab Allam, who is running the club in his father's absence. The team are yet to make a summer signing, and the squad is depleted by injuries.

While, off the field, there is discontent with the direction Hull has been taken amid attempts to rename the club.

END_OF_DOCUMENT_TOKEN_TO_BE_REPLACED

A Hull fan and blogger has made a list of the problems currently besetting the Premier League side, and it makes for pretty grim reading.

To make things worse, Mohamed Diame, one the club's better players, is reportedly on the verge of a move to Newcastle. 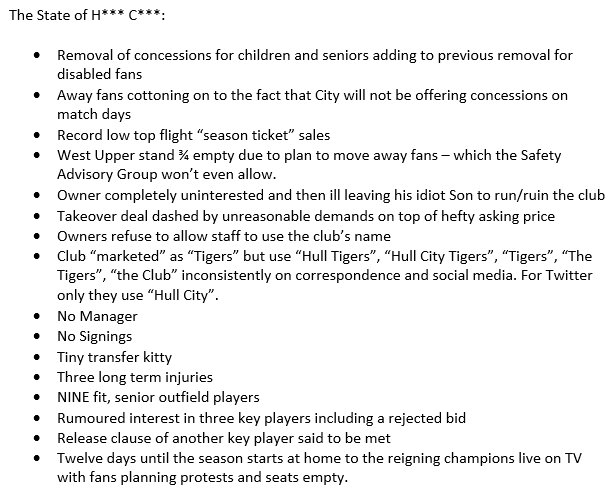