36 fights over three days during international fight week has resulted in a serious shake-up in the UFC rankings.

Despite not fighting in either of the three cards last weekend, Demetrious Johnson and Dominick Cruz have both moved up in the pound-for-pound rankings... you can probably guess why.

END_OF_DOCUMENT_TOKEN_TO_BE_REPLACED

Rafael dos Anjos took the biggest fall in the rankings, dropping eight places to 13th following his first-round TKO loss to Eddie Alvarez, who is a new entrant at eighth. The other new arrival was top bantamweight contender TJ Dillashaw who secured revenge for a previous loss over Raphael Assuncao by getting a unanimous decision victory over the Brazilian at UFC 200.

Conor McGregor, Jose Aldo, Joanna Jedrzejczyk, Stipe Miocic and Luke Rockhold all moved up, while Frankie Edgar was the only other fighter to take a tumble. 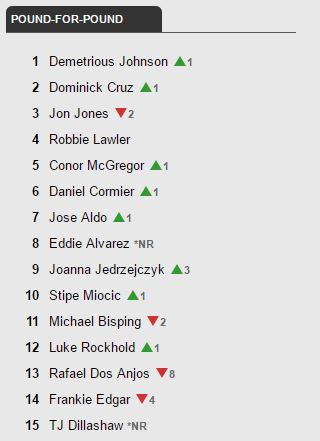 END_OF_DOCUMENT_TOKEN_TO_BE_REPLACED

In the welterweight division, Kelvin Gastelum was rewarded handsomely for comfortably beating former 170 lb champion Johny Hendricks in Las Vegas. The 24-year-old made a six-place jump up to sixth, while Bigg Rigg slid down two to eighth.

Khabib Nurmagomedov has officially become the number-one contender at 155 lb, while the dethroned RDA fell back to second in the rankings. Former Bellator lightweight champion Will Brooks enters at 12 following his successful promotional debut against Ross Pearson. 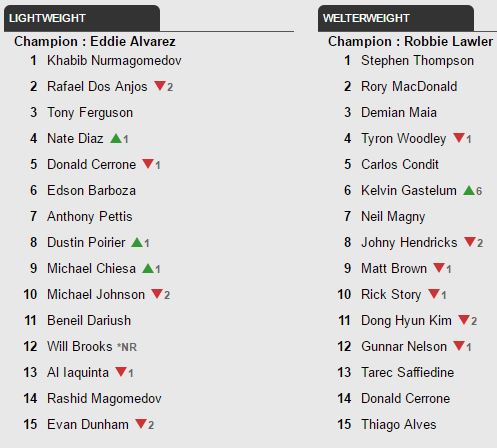 In the new-look women's bantamweight division, Miesha Tate, Holly Holm, Ronda Rousey and Cat Zingano all fell down the pecking order after Amanda Nunes was crowned the new queen.

END_OF_DOCUMENT_TOKEN_TO_BE_REPLACED

Finally, former heavyweight champion Brock Lesnar returned to the heavyweight rankings in eighth place as a result of his incredible performance against knockout artist Mark Hunt, who dropped one place. Derrick Lewis also moved ahead of Roy Nelson after his victory over Big Country last week. 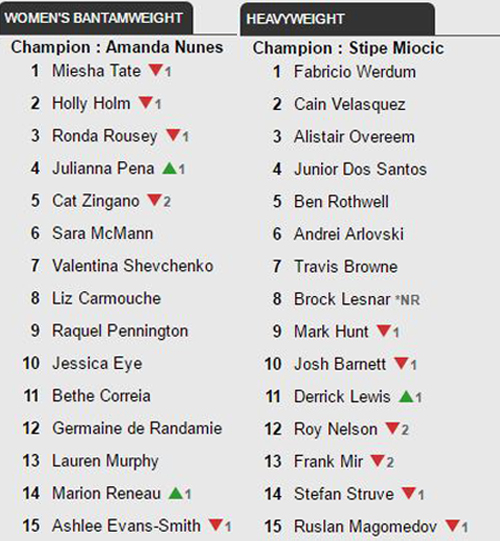