Hope Solo does not like to lose. It's an admirable trait, but one she could often do with packing away once she crosses back over that white line.

The USA Women's goalkeeper let rip at Sweden, and their style of football, after her team was eliminated from the Rio Olympics in a penalty shootout. Following the loss, Solo declared:

"We showed a lot of heart. We came back from a goal down, I’m very proud of this team. And I also think we played a bunch of cowards.

"The best team did not win today, I strongly, firmly believe that."

Cristiano would have been proud https://t.co/89K0hAdOPP

Those firm beliefs have now landed Solo a six-month ban from playing with her country. US Soccer president Sunil Gulati labelled her comments as "unacceptable". Solo will miss two national team games during the ban.

The 35-year-old took to Facebook upon learning of her ban. The words 'sorry' or 'apologize' [sic] do not appear in her post.

"I could not be the player I am without being the person I am, even when I haven't made the best choices or said the right things. My entire career, I have only wanted the best for this team."

There is no mention of Solo stepping away from her international commitments. 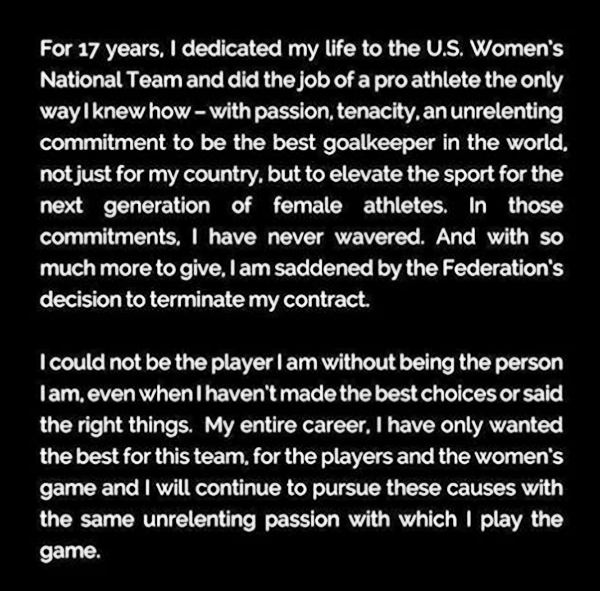 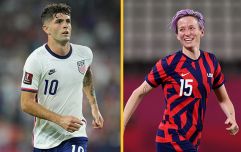 END_OF_DOCUMENT_TOKEN_TO_BE_REPLACED

The Seattle Reign stopper won't be adding to her 202 national team caps until February 2017 at the earliest, and not everyone is convinced the call from US Soccer is the right one.

It seems to be a case of three (or possibly more) strikes and out, but should this even count as a strike?

One hand: Hope Solo’s ban is cumulative, not just for the comments.

Other hand: Isn’t that confirmation they’ve handled her poorly til now?

If male footballers got six-month bans for the sort of comments Hope Solo made they'd be no players left.

popular
Outcry after woman sentenced to four years for miscarriage of 17-week-old foetus
Salt Bae's London restaurant is being flooded with negative reviews
The FootballJOE Pub Quiz: Week 10
Elon Musk is now worth more than Warren Buffet and Bill Gates combined
Amateur side Peterborough Rangers win 40-0 against Sawtry Reserves
Gary Neville slams Newcastle's handling of Steve Bruce
Fans praise Chris Evans for being honest about his mental health
You may also like
News
Enough opioids to kill 50 million people seized in California
News
FBI find body in search of Gabby Petito as hunt for boyfriend continues
News
Leader of Texas anti-mask movement dies from Covid-19
Fitness & Health
Man who was ‘too busy’ and 'stubborn' to get Covid vaccine now urging everyone to do so
Politics
Biden says Cuba is a failed state and Communism is a failed system
Next Page