Both have had incredibly prolific seasons

Kane enjoyed another prolific season with Tottenham Hotspur, helping the North London team to get over their 'Wembley hoodoo', as well as winning the Golden Bootwith England at the 2018 World Cup, where he scored six goals.

Meanwhile, Salah won the Premier League Golden Boot for the 2017/18 season after scoring a record 32 goals throughout the campaign. His World Cup campaign was soured by him carrying a shoulder injury sustained in the Champions League final as well as off the pitch controversy, but his club form rightly puts him among the contenders for the individual award.

The usual suspects of Cristiano Ronaldo and Lionel Messi are of course on the list, as well as World Cup winners Antoine Griezmann, Kylian Mbappé and Raphaël Varane. 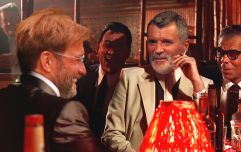 END_OF_DOCUMENT_TOKEN_TO_BE_REPLACED

Belgian duo Eden Hazard and Kevin de Bruyne have also made the cut after an impressive World Cup and in De Bruyne's case, a quite incredible league campaign with Manchester City.

Luka Modrić is the final name on the list, after he played a key role in Real Madrid's third consecutive Champions League victory and taking Croatia to their first ever World Cup semi-final.

Individual awards in a team sport attract criticism, but we are in the era of the superstar, when individual players can have bigger global fanbases than clubs.

In a different era, without the Messi and Ronaldo duopoly, they would all be worthy winners. However, you can almost certainly guarantee that the award will once again end up in Ronaldo's hands.

You may also like
Sport
Jurgen Klopp calls out Roy Keane for "sloppy" comment
Sport
Neco Williams blacks out Twitter account after abuse over mistake
Sport
Liverpool assistant praises impact of 'monster' Diogo Jota in training
Sport
Roman Abramovich held stake in player who played against Chelsea
Sport
QUIZ: Can you name the 5 Liverpool players in 15 seconds?
Next Page