"Go in there and join in the fight."

Graeme Souness has criticised Tottenham Hotspur players for 'not being competitive' after they suffered an embarrassing 3-1 defeat to Arsenal in the North London Derby.

END_OF_DOCUMENT_TOKEN_TO_BE_REPLACED

The Gunners scored three times in the first half courtesy of Emile Smith Rowe, Pierre-Emerick Aubameyang and Bukayo Saka, ensuring that they went into the half-time break with a comfortable lead.

Mikel Arteta's men dominated the majority of the second period, but did concede late after Spurs rallied well to score a consolation goal through Son Heung-min.

Despite this, Arsenal held strong and ensured that they sealed a memorable North London Derby victory - one that takes them above Spurs in the Premier League table.

Arsenal continue to cut through Spurs like a hot knife through butter. Too easy pic.twitter.com/W3jlAhgDiH

During the half-time break, Sky Sports pundit Graeme Souness was heavily critical of the away side's first-half performance, in particular, Spurs' midfield trio.

His opinion on the topic hadn't changed after the final whistle, either.

END_OF_DOCUMENT_TOKEN_TO_BE_REPLACED

The ex-Liverpool captain suggested that Nuno Espírito Santo's men spent the entirety of the first period on the back foot, stating that they had no desire to be the first to the ball.

"I accept that sometimes you see midfield players go and get the ball cheap off the back three or four when you're on the front foot and you're maybe dominating the game to get started," said Souness.

"But when you're not dominating the ball, you have to get your midfield in against their midfield to stop them dominating you.

"The first half was so one-sided, Spurs were defending this end where we're sitting and [Pierre-Emile] Højbjerg time and time again could hold hands with his centre-backs.

"When they were getting outnumbered and outmuscled in midfield, go in there and join in the fight. 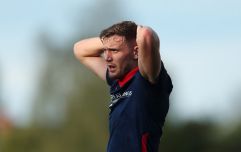 END_OF_DOCUMENT_TOKEN_TO_BE_REPLACED

"All these tactics and formations - the best tactic you can have in your locker is to be first to the ball.

"Spurs were not first to the ball once in that first 45 minutes, they spent the whole time on the back foot and it's screaming at them what they're not doing, they weren't competitive in any shape or form."

🗣"Spurs were not first to the ball once in that first forty five minutes."

It is the first time since August - September 2003 that Tottenham have conceded 3+ goals in 3 successive Premier League games, as per Sky Sports Statto.

They have also dropped below their North London rivals in the table on goals scored.

On the other hand, Arsenal have won their last three Premier League fixtures and have picked up some form after losing their opening three games of the season.