The people of Kosovo are supporting their idols

Switzerland stars Granit Xhaka and Xherdan Shaqiri landed themselves in hot water after celebrating their goals against Serbia by making the pro-Kosovo double eagle gesture.

Kosovo declared independence in 2008, but Serbia do not recognise its existence, making it a very politically charged fixture given the Switzerland team features several players of Kosovan descent. Xhaka was born in Switerzland to a family originating from Kosovo, while Shaqiri was born in Kosovo before leaving during his infancy.

FIFA have strict rules against players displaying any sort of political messages, and consequently issued fines of 10,000 Swiss francs to both Xhaka and Shaqiri, while Swiss captain Stefan Lichtsteiner received a ban of 5,000 for his part in the celebrations.


A GoFundMe page has been launched to raise money to pay for the fines, and it has reached 80% of its 25,000 target in just one day. 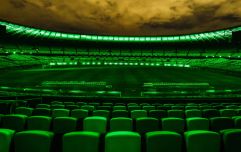 FIFA estimate football has lost over £11 billion to Covid-19

END_OF_DOCUMENT_TOKEN_TO_BE_REPLACED

The people of Kosovo have been donating to the page in support of their footballing heroes who, had been booed throughout the entire game by Serbia fans.

Kosovo Commerce and Industry Minister Bajram Hasani said he had donated 1,500 euros, which is his monthly salary.

"They (players) were punished only since they did not forget their roots, they did not forget where they are croming from," Hasani said quoted by local media. "Money cannot pay the joy that Granit Xhaka and Xherdan Shaqiri brough us by celebrating with the eagle sign their goals during the Switzerland-Serbia match."

You may also like
Sport
Hands on with FIFA 21, where the 'fundamentals of football' come first
Sport
The Evolution of FIFA Graphics: 1994 to 2020
Sport
How to be a true FIFA dickhead
Sport
Red Card Soccer: The most brutal football game ever made
Entertainment
Why Pro Clubs is the best game mode on FIFA
Next Page