A report in the Observer on Sunday made some explosive claims about England's Euro 2016 campaign.

The Three Lions returned home with their tails between their legs after a humiliating defeat against Iceland in the last-16 of the competition.

The Observer had a report claiming that former England manager Roy Hodgson and his coach Gary Neville had a series of disagreements behind the scenes, which led to tension amongst the squad.

"Hodgson’s training methods – questioned by Steven Gerrard after the last World Cup – were one source of the disagreements. Neville had a close ally in Dave Watson, the goalkeeping coach.

"Players have complained of mixed messages and the general sense of confusion is not eased by the revelation that one turned to the dugout during the Iceland defeat and asked where a team-mate was supposed to be playing." 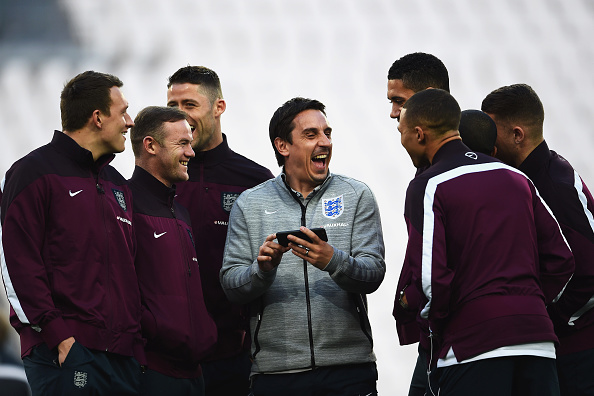 Neville responded to the story via Twitter on Sunday morning, and he wasn't pleased. The former Valencia manager called the article "absolute bullshit," and demanded an apology.

this is absolute bullshit! Apology? Removal of article? Let me know!

popular
Premier League player arrested on suspicion of rape facing two more allegations
Towie’s Yazmin Oukhellou and Jake McLean had ‘furious row in Turkish club’ minutes before horror crash, report claims
Lurpak spotted on sale for £9.35 in supermarkets - with security tags on packs
Conspiracy theorists believe the world will end today - here's why
British schoolboy breaks internet after attending prom in sequined tuxedo ballgown
Teens are turning up to watch Minions in suits - and why cinemas have been forced to ban them
Noel Gallagher branded 'vile' by disability charity after Glastonbury comments
You may also like
Sport
Eddie Nketiah and Tariq Lamptey close to switching international allegiance
Sport
Gareth Southgate says 'WAG' is a 'disrespectful' term
Sport
Fan 'racially abused and punched' by Germany supporter who made slur at Jude Bellingham
Sport
Owen Farrell, Manu Tuilagi and 10 uncapped players in latest England squad
Sport
'He's got an aura about him' - Big calls as Kyle Sinckler selects his 'Ultimate Pack'
Next Page