The World Cup is a matter of months away.

And with the first international break of the calendar year on the horizon, we should soon be given a good idea of how Gareth Southgate's squad for Russia will shape up. 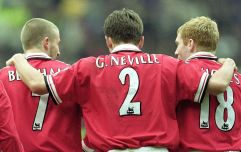 END_OF_DOCUMENT_TOKEN_TO_BE_REPLACED

One man guaranteed of a place on the plane is Tottenham striker Harry Kane, who has yet again shown he is one of the finest goal scorers in world football this season.

Not only is the Premier League's joint-top scorer expected to lead the line in an attacking sense for his country this summer, but it's now emerged that he could also be handed the captaincy.

Jordan Henderson, Gary Cahill, Joe Hart and Eric Dier each wore the armband during England's November friendlies against Brazil and Germany last year, but a report claims Kane is now edging ahead of them as favourite to wear the armband in Russia - despite Southgate having reservations about naming a striker as skipper.

Southgate is said to have spent 'a great deal of time' considering who should take the captaincy on a permanent basis, rotating it amongst the other four players as a result. With some of those players sliding down the pecking order with their clubs in the time that has passed since the last international break, Kane has now emerged as a decent option to take the role.