This is not an exaggeration

Fulham were denied an equaliser in their game against Tottenham after probably the worst VAR handball decision since the technology's introduction to football. 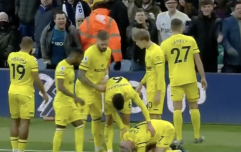 Brentford's Sergi Canos struck by object during celebrations against Leeds

END_OF_DOCUMENT_TOKEN_TO_BE_REPLACED

I know we're all tired of talking about it. I know it's tHe LaWs and not VAR itself. But if the technology wasn't around, this goal stands and nobody bats an eyelid, because it's a legitimate goal.

Honestly, look at this this and tell me it should be disallowed for handball. Forget what the laws say - should this goal be disallowed?

No. it shouldn't. Mario Lemina's arm is by his side. It's literally tucked in next to his body. What is he meant to do?

Of course, Peter Walton confirmed to everybody watching that this was in fact the right call, which is seemingly all he is there to do. 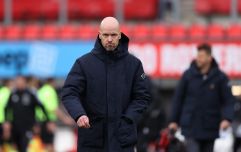 END_OF_DOCUMENT_TOKEN_TO_BE_REPLACED

But ask yourself this: Has Lemina gained an unfair advantage? Would the passage of play have been any different had the ball struck his thigh? Where is his arm? What is the point in anything? Has the game gone? Why do we still bother? Who even cares about football this season? Why don't we just let the game run without VAR trying (and failing) to correct every human error?

Sorry. Had to get that out.

Before this incident, Spurs had taken the lead through a Tosin own goal, after he deflected in a shot from Dele after a blitzing counter-attack from the visitors.