It's that time of year again.

With no meaningful football for a couple of months, some folk attempt to fill the void by getting excited about the next game in the Fifa instalment. 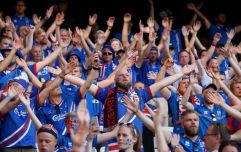 END_OF_DOCUMENT_TOKEN_TO_BE_REPLACED

Already this summer, we've learned that both Ronaldos - the Portuguese and Brazilian one - feature prominently on the new game. Whereas Cristiano is the game's cover star, the World Cup winner has been added to the game as one of its icons.

Now, in their latest announcement, EA Sports have revealed the names of four more Icons that will be appearing in the game's Ultimate Team mode.

EA Sport have promised to announce the names of more Icons in the coming days and weeks, with the legends feature being extended to PlayStation 4 and PC after previously only being available to Ultimate Team players on Xbox.

popular
Fans shocked by Tommy Lee's extremely X-rated post on Instagram
Robin Williams' wife shares reason why he killed himself
‘Time traveller from 2090’ warns humans of worst event in history in coming days
Groom shocks wedding by playing video of his bride cheating with her brother-in-law
Woman arrested after husband caught her on video allegedly using drain cleaner to poison him
Emergency service workers took photographs of Kobe Bryant’s body 'for a laugh’
Intruder who broke into monkey enclosure in Tasmania at risk of ‘potentially fatal’ herpes
You may also like
Gaming
FNATIC crowned Gfinity Elite Series Season 3 FIFA 18 champions
Gaming
Belgium has banned loot boxes in video games, declaring them gambling
Entertainment
Making a simple change to your TV's settings will make you better at FIFA
Entertainment
QUIZ: Can you guess the FIFA game from the songs on the soundtrack?
Sport
Manchester United have launched a new kit...via FIFA 2018
Next Page