A Formula One marshal working at the Saudi Arabian Grand Prix has been forced to quit his job after he sent Lewis Hamilton a tweet in which said he hoped he crashed.

END_OF_DOCUMENT_TOKEN_TO_BE_REPLACED

The tweet, which has since been deleted, said that he hoped Hamilton would suffer a similar accident to what Romain Grosjean endured at the 2020 Bahrain Grand Prix.

Grosjean suffered severe burns to his hands after crashing into the barriers on the opening lap of the Bahrain Grand Prix - with his car bursting into flames.

The marshal had replied to a tweet from Hamilton in Arabic which translated to: "I hope he has an accident like Romain in Bahrain."

What action did the FIA take? 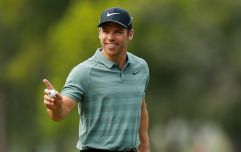 END_OF_DOCUMENT_TOKEN_TO_BE_REPLACED

After being alerted to the tweet the FIA confirmed that an investigation had taken place and that the Marshal had been removed from the event and would no longer work across the rest of the weekend, as per ESPN.

Following confirmation that he would no longer work the event, the marshal posted an apology on his account - which is no longer public - and confirming his resignation.

END_OF_DOCUMENT_TOKEN_TO_BE_REPLACED

It said: "I would like to apologise to SAMF (Saudi Arabian Motorsport Federation) and Lewis and announce my resignation from my duties on track."

Sunday's race is still set to go ahead despite the ongoing missile strikes that have been heard just 12 miles away from the race track in Jeddah.

A long meeting was enough to persuade drivers to go ahead with this weekend's #SaudiArabianGP https://t.co/Ds8qta4nsw

A four-hour meeting was held between drivers and senior race figures on Friday following the first practice sessions however reassurances from F1 officials and Saudi government ministers have to a decision that the race can go ahead.