Premier League players Mesut Özil, Ilkay Gündoğan and Cenk Tosun have been criticised by the German FA for meeting with the President of Turkey, Recep Tayyip Erdoğan and taking photographs with the autocratic leader. Özil and Gündoğan both have Turkish heritage but represent Germany, while Tosun plays for Turkey. 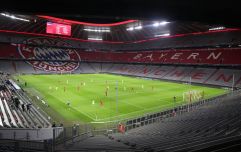 Bundesliga clubs can have maximum of 15,000 fans in new covid restrictions

END_OF_DOCUMENT_TOKEN_TO_BE_REPLACED

Emre Can also represents Germany but comes from Turkish descent. According to Welt, the Liverpool midfielder was also invited to meet with Erdoğan, but declined out of principle.

Gündoğan has issued a statement in defence of meeting with the Turkish President, who has a history of suppressing dissenting voices in Turkey and arresting critical journalists. The Manchester City midfielder insisted that he chose to take up the invitation "out of respect for the office of the President and our Turkish roots - even as German citizens - as a gesture of courtesy."

Gündoğan and Özil will both travel to Russia this summer as part of the Germany squad, while Emre Can narrowly missed out on a call up having been injured since March.

Cenk Tosun won't be going though, as Turkey did not qualify for this year's tournament, finishing fourth in their qualifying group behind Ukraine, Croatia and Iceland.