"I remember studying a lot of Chelsea’s penalties on DVD before the match."

Edwin van der Sar will be remembered as one of Manchester United's best goalkeepers, and he was arguably as good as Peter Schmeichel was for the club. The Dutch 'keeper proved a worthy replacement for Schmeichel at Old Trafford when he arrived at the club from Fulham. The only problem was United fans had to wait six years between the Dane leaving and Van der Sar arriving in 2005.

However, the former Ajax and Juventus goalkeeper proved worth the wait, and played a key part in one of the club's greatest nights.

END_OF_DOCUMENT_TOKEN_TO_BE_REPLACED

The Dutchman correctly guessed that Nicolas Anelka would kick to his right during the penalty shoot-out, and stopped his effort to win United the European Cup for the third time in their history.

END_OF_DOCUMENT_TOKEN_TO_BE_REPLACED

Sir Alex Ferguson's team and Chelsea couldn't be separated during the game, which finished 1-1 and went to extra-time. It looked like Chelsea would win the competition for the first time in their history when John Terry stepped up to take the final penalty. Cristiano Ronaldo had missed his kick, and the Chelsea captain had the opportunity to win it for his club.

However, with the rain pouring down in Moscow, Terry slipped and his effort hit off the post and went wide. 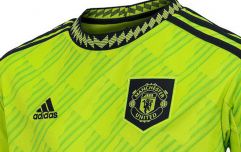 END_OF_DOCUMENT_TOKEN_TO_BE_REPLACED

United had received a slice of luck when Terry missed, but there was nothing lucky about Van der Sar's decisive save from Anelka's penalty. The Dutchman, who is currently working as the CEO of Ajax, had done a lot of research ahead of the penalties.

"I remember studying a lot of Chelsea’s penalties on DVD before the match," Van der Sar told Four Four Two.

Van der Sar also said he regards the victory as the best moment of his entire career.

"After I had pushed away Anelka's penalty, I feel like I was separated from the world for a couple of seconds. I don’t think I’ll ever experience a more ecstatic moment than when I realised we’d just won the Champions League final and noticed all my team-mates running towards me. It was the highlight of my whole career."

You can watch highlights of the 2008 final here.