Maradona prefers not to hold back

It's been a tough tournament for Argentina. A draw, a loss and a win in the group stage just about qualified them for the round of 16, where they met France in arguably the game of the tournament so far.

There were glaring problems with the squad, which lacked quality in defence and balance in attack. Jorge Sampaoli changed his formation and line up for every game at this tournament, demonstrating the lack of preparation Argentina went into the World Cup with.

Diego Maradona, Argentine icon and one of the greatest players of all time, was in attendance at all of Argentina's games and was often very animated in the stands. He's also been very vocal since his nation were knocked out by France, lamenting how far such a great footballing nation has fallen.

"We came to the cinema more than the pitch, because we came to see the chronicle of an announced death. And that's what happened," he said on teleSUR.


"France contained Messi, Argentina's midfield, so he could not get in behind them," he added. 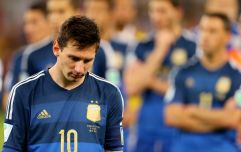 END_OF_DOCUMENT_TOKEN_TO_BE_REPLACED

"Without Messi we are just another team.

"The game was played in a way we anticipated. What we were expecting happened.

It is hard to disagree with Maradona's assertion that without Messi, this Argentina side is nothing special. There are a plethora of contributing factors to Argentina's downfall, namely the lack of young defenders coming through from youth teams, and it will take a structural overhaul to arrest the decline of one of football's greatest countries.


popular
Joe Rogan forced to apologise for comments he made about Jose Aldo's physique
Only the most driven and devoted will get full marks in our Roy Keane quiz
The JOE Friday Pub Quiz: Week 199
QUIZ: Can you identify the ice lolly that's in black and white?
The definitive ranking all 151 original Pokémon from worst to best
A definitive ranking of every swear word from worst to best
How to charge your mobile phone with a banana (Video)

You may also like
Football
Imagining a world without Lionel Messi at Barcelona
Sport
Lionel Messi has become a victim of his own consistency
Football
Can Lionel Messi really do it all on his own? A Football Manager Story
Sport
Argentina's failures will never take away from Lionel Messi's greatness
Sport
QUIZ: How well do you know Lionel Messi's international career?
Next Page